Leaving Port Augusta for home I write this last note with sadness as we have had such an experience.
Driving the Kombi slowly, needing to stop regularly, stinking hot at times all made the trip interesting it gave us a chance to really see the sights rather than passing flashes at 110kph.  We’ve struggled through 46C temps, Cyclones forming, flooded creek/river crossings, 90% humidity and some beautiful weather at the most unlikely places such as The Nullabor Plain, Alice Spring and Uluru have all added to the experience that neither of us will forget.
Next year Boris the Kombi will definitely be called upon to take us around the east coast of Australia. Stay tuned for 2013 The Wirth’s in their 74 Kombi will continue.
Cheers
Bev and Darren Wirth
March 2012
Posted by Bev and Darren Wirth at 16:37 No comments:

We left Coober Pedy at 730am and were unsure about how far to travel today. We travelled down taking in the sights such as Lake Hart and several other scenic photo stops. Entering to get petrol at Glendambo the sign that greeted us was quite humorous, check the sign out below, as it will explain its self. As we approached Pimba we decided to drive a few km to Woomera. A very neat but almost deserted ghost town, there were only a few people to be seen, some kids waving at the kombi and most others likely to be tourists looking at the static displays. We left to get petrol at Pimba only to have the owner yack to Darren for ages about VW’s.
We arrived at Port Augusta and decided we would book a cabin for what will be our last night on the road after 30 days on the road. Luxury.

Posted by Bev and Darren Wirth at 16:36 No comments:

Today it was up early as usual but today we were being picked up By Wayne from Arid Areas Tours for a 4WD tour to Lake Eyre. We left Coober Pedy to travel down the dirt road some 166km to William Creek to join the Oodnadatta Track to a track some 66km to Lake Eyre.
Where do you start to tell this story, driving a few minutes and its stop to pass the 500km Dog Fence. The best bit about Wayne's tour is that they are tailored to whatever you want. Wayne would stop for anything we would want to photograph and nothing was too much trouble, his knowledge matched his professional driving skills. Along the way we had close encounters with brown snakes, Bearded dragons and of course flies the minute you opened the door. The drive along William Creek Road was pretty smooth with a couple of washouts and several patches of corrugation likewise with the Oodnatta Track. The majority of the tour is actually passing through Anna Creek Station the latest Station in AustraliaAfter a short stop at William Creek we drove a few km down the track to join the track to Lake Eyre and a track was a kind word for the next 63km.

The track is poorly maintained and for the unexperienced 4WD would definitely be selected during the numerous thick sandy patches of the mud/water hazards. The most interesting thing about the drive was the number of times the landscape changed, the images Darren and I had were of a flat drive. We couldn't have been further from the truth.


Lake Eyre, what can you say an expansive of white salt with some water in the distance. We walked out a few hundred metres but the salt was slippery and later quite wet suctioning the boots as you walked. You have to be there to really appreciate its beauty. 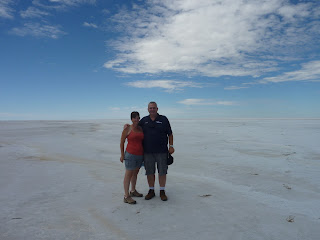 After lunch on the lake we drove back to William Creek for a beer in the 1887 timber and corrugated iron pub. Character all through it. From there it was a visit to the Lake Cadibarrawirracanna which was quite plentiful with water. At 7pm we returned to the caravan park after what can only be described as a fantastic day in the outback.

Today we visited the Old Timer's Mine exhibit in Coober Pedy. This was a very well presented self tour walking through several chambers of an original opal mine and then through to the main rooms of one of the families that lived underground back in the 1960's. Well worth a visit. Next it was off to check out some of the opal stores eventually visiting the Opal Beetle with a VW beetle out the front. Couldn't resist.
We also organised a 4WD trip with Wayne from Arid Areas Tours for Wednesday visiting Lake Eyre via William Creek. Looking forward to this we decided to relax with a cold XXXX beer for the rest of the day.

Posted by Bev and Darren Wirth at 00:51 No comments:

Today its 250km just to get back to the Stuart Highway heading to Coober Pedy so in all it’s a 700km trip making it a long day. Travelling along to South Australia we noticed that the red desert look was more pronounced here than in the Northern Territory.
We didn’t do much other than petrol at Marla and by the time we arrived at Coober Pedy we were dog tired but soon woke up looking at the weird landscape with piles of white dirt everywhere from the diggings. We soon set up the tent found a pizza shop and enjoyed a cold beer, but whilst sitting in the drive thru a bloke comes along trying to flog of his $1000 opals Darren gave him a quick no thanks.
One thing about Coober Pedy there are millions of FLIES!

Posted by Bev and Darren Wirth at 22:50 No comments:

Today it was to be a scenic fight but at 8am all we could do was leave a message so we decided to go driving off in search of the Olga’s after entering the park the company representative, pilot, check in and taxi driver Oliver called and we arranged a fixed wing and helicopter flights over Uluru, The Olga’s and Lake Armadas before a dirt strip landing in Kings Creek to join a helicopter for a flight over Kings Canyon.

We arrived at the airport to board a four seat Cessna and I looked at it thinking how on earth are we all going to fit in that. We jammed ourselves in taxied out only to turn around as the helicopter piot had left his fuel cap back at the refueling point. Oliver had to go looking for it and returned with shortly later fuel cap in hand. We were both thinking what have we signed up for! We took off on what was money well spent adventure. It was a little bumpy at times but I didn’t need the chuck bag.
The landing at Kings Creek Station strip was surprisngly smooth considering some of the grooves in the dirt. After some ribbing at Angus, the helicopter pilot’s expense we were off on Darren’s first helicopter flight. It was a great experience but disappointing in that we didn’t drop down in the canyon as we thought was the case but still it was a pleasant flight.
We stayed at the Station for a burger and a chat to the local Sulphur Crested Cocky named Charlie before a smooth flight back to Uluru.
Sit down after that now way we were off to the Olga’s for a walk, which really finished the day off nicely.

Posted by Bev and Darren Wirth at 22:35 No comments:

We set off around 7am to venture to Uluru some 465km from Alice Springs and arriving early afternoon. We had a pleasant drive with the wind pushing the Kombi along saving us some petrol along the way. As we were driving along I said to Darren there’s Uluru but as we got closer it was Mt Connor (or as we later find out Foolaroo) but a little later Uluru could be seen in the distance. What a sight!!
We arrived at the Ayres Rock Resort campsite and set up our tent and left to see Uluru. As you drove closer we were just stunned by its majestic beauty. After parting with $25 each for a thre day pass we decided to tackle the base walk some 10.6km. We made it after 2hrs and 10minutes with Darren really feeling it but he said it was worth it. We watched a few people struggled down from the climb but for us it was an easy no-way I’m not climbing that! After that walk it was off to find some food, Fish n Chips and a cold beer. (Just don’t ask about the costs)

Posted by Bev and Darren Wirth at 22:01 No comments:

Bev and Darren Wirth
This is a blog of part one of our travels around Australia in our 1974 VW Kombi. Adelaide to the West Coast to Darwin and back down the centre. Part 2 will be the East Coast 2013